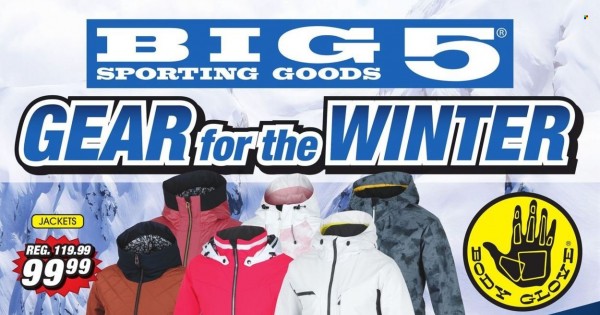 Big 5 Sporting Goods is one of America's top retailers of name brand sporting goods and accessories. As of November 13, 2018, Big 5 had 434 locations spread throughout 11 western states and you can find a convenient location near you using our Store Locator.

Big 5 Sporting Goods was founded in September 1955 as an army surplus store by Maurie and Harry Liff and Robert Miller, father of current CEO, Steve Miller. The trio operated a handful of stores in the Greater Los Angeles area and quickly expanded their product line to include camping gear and sporting goods. Since the earliest days, the company has advertised in newspaper print ads and customers grew accustomed to looking in the weekly ads for special low prices and deals.
Over the next 50 years, the company continued to expand and push into new markets. In 1971, the company was acquired by Thrifty Drug Stores and operated as a subsidiary of Thrifty for the next 21 years, expanding to 140 stores in California, Nevada and Washington. Company management acquired Big 5 in conjunction with a private equity firm in 1992 and over the next five years opened new stores in Arizona, Idaho, New Mexico, Oregon and Texas. With Robert Miller still at the helm as CEO and his son Steve as President and COO, the Millers led a management effort to acquire a controlling stake of the company in 1997. Steve Miller would become CEO in 2000 and take Big 5 public in 2002.
When Big 5 reached its 60th Anniversary in 2015, the company had expanded to include 437 stores in 11 states and an online store. The launch of the eCommerce store in 2014 allowed customers from outside the core 11 Big 5 states to purchase from the online store. Even though the company has grown and expanded through the years, Big 5 has maintained its core strategy of providing customers with low prices and a convenient shopping experience.

You will find Big 5 Sporting Goods in these categories: