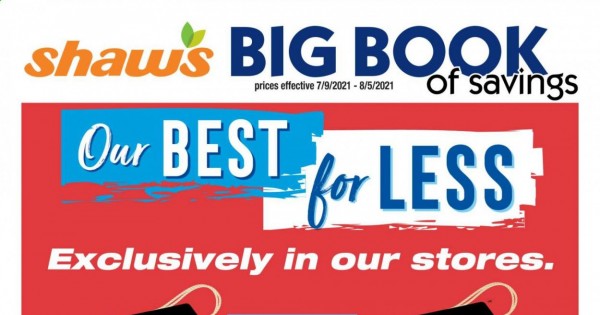 Shaw’s is one of the oldest continuously-operated supermarkets in the United States. Its New England roots were planted firmly in May of 1860, when George Clinton Shaw opened a small retail grocery store, located at 285 Middle Street in Portland, Maine. The store stocked 100 items, most of which were not available from local farmers. In 1919, Mainer Maynard A. Davis moved to Massachusetts, founding a group of small downtown grocery stores in the Brockton and New Bedford areas called Brockton Public Markets, or BPM stores. These entrepreneurs showed the seeds that would one day becomeShaw’s Supermarkets, Inc. In later 1919, Davis purchased the George C. Shaw Company of Portland, Maine, choosing to operate the two grocers independently. Over the past 150 years, the growth of Shaw’scan be attributed directly to the ingenuity of these pioneering grocers, and their core value of offering unparalleled service and quality products.

Shaw’s Today—You’re in For Something Fresh!

Today, Shaw’s and its sister company Star Market continue to thrive and are working to become the favorite food and drug retailer of every state in which they operate. Shaw’s operates 150 stores throughout New England, which is part of a 2,200+ store operation that employs approximately 265,000 people nationwide. In 2013, our parent company, AB Acquisition LLC, acquired Shaw’s from SUPERVALU, a transaction bringing all Albertsons stores under singular ownership again. This merger added Jewel-Osco, ACME Markets, and Star Markets to the growing food and drug retailer.

All our stores—no matter under which banner they operate—were founded on the philosophy of offering customers the products they want at a fair price, with lots of tender, loving care. We still open our doors every day today with that core value in mind—and because of it, we run really great stores.

You will find Shaws in these categories: